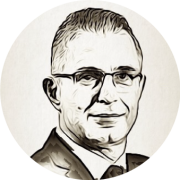 ALİ BATURAY | HABER KIBRIS
Ali Baturay was born in Klavia (Alanici) village of Larnaca on 14 October 1968. He studied journalism. He holds a master’s degree focusing on “New Media and Changing Newspapers and Journalism in the Northern Part of Cyprus”. He worked for Halkın Sesi Newspaper between 1986-1995, for Yenidüzen Newspaper between 1995-1998 and for Kıbrıs Newspaper for 22 years, between 1998-2020. He worked as news director, managing editor and editor-in-chief at Kıbrıs Newspaper. He started working at the digital newspaper Haber Kıbrıs in February 2020. Currently, he works as the general editorial coordinator of Haber Kıbrıs. He writes daily columns and is the producer of a programme titled “Markaj” at Haber Kıbrıs Web TV during week days.
| Cyprus Problem |
By ALİ BATURAY | HABER KIBRIS

THE AEK LARNACA-FENERBAHÇE GAME, A MATCH FULL OF STORIES…

THE STATE LEASES ITS OWN PROPERTIES AT LOW PRICES, ENABLING OTHERS TO GET RICH OFF THE PROPERTIES RENTED

THEY SAY THEY’RE GOING TO GIVE IMPORTANCE TO EDUCATION AND MERIT WHEN HIRING IN THE PUBLIC SECTOR! DON’T BELIEVE EVERYTHING YOU HEAR

YES, THE COUNTRY IS BEING RUN POORLY TODAY BUT LET’S NOT FORGET THE ADMINISTRATIVE MISTAKES OF THE PAST FROM WHICH WE HAVE LEARNED NOTHING

IS THE SEWAGE PROBLEM LESS IMPORTANT THAN PLASTIC BAGS?

THE STREETS OF THIS PLACE ARE NOT PAVED WITH GOLD, THEY NEVER WERE AND CERTAINLY AREN’T NOW

EVEN IF YOU DON’T LIKE ITS CONTENTS, IT’S NOT RIGHT TO HIDE ANASTASIADES’ LETTER FROM THE PUBLIC